Optical Microscopes are something which was invented 1950 by Zacharias Jansen. This piece of complicated equipment is helping in curing diseases of decades. Till now, Microscopes were available in many different sizes and shapes. All the perception of the microscopes now has been changed by an Indian Scientist.

IIT alumni Manu Prakash, Assistance Professor of Bio-Engineering at Standford University, have invented the Low-cost paper microscope, Fold-scope which costs less than $1. The microscope design is made from a single sheet of paper and also contains lenses and electronics. The Idea came up when he was on a trip with his students in developing the world and how to prevent deadly diseases like malaria and dengue.

On his invention, he said “In Kenya, there are not enough anti-malarial drugs but even still they are given blindly. They are being over-used because people are so scared.”

While the world scientist is indulging themselves in making costly and hi-tech equipment to solve health issues.  Mr. Prakash has revolutionized the microscope. He manages to create a microscope which is built entirely out of paper and it can be made by simply folding it.

The microscope can make by folding an A4-size sheet into given markings. As it is made of the paper sheet it is pretty undestroyable. It will still work if you throw it in water, stand on it, jump on it and throw it from a five-storey building. 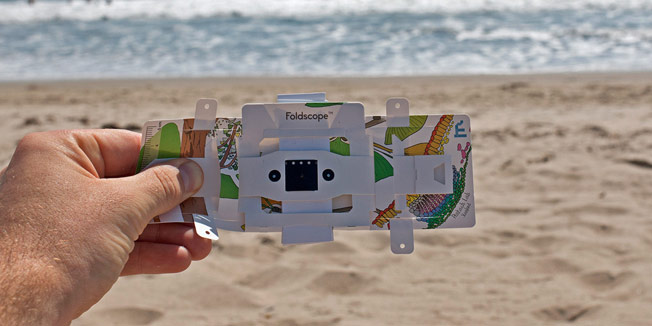 For this invention, Manu Prakash received won USD 625,000 award this year and he has also won the prestigious MacArthur ‘genius grant’ fellowship for his low-cost paper microscope.