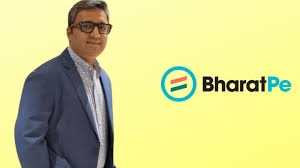 BharatPe, a Fintech company has recently been in the news for all the wrong reasons. Bharat pe is a QR based payment app for offline businessmen and retailers. The app allows users to accept UPI payments through the BharatPe QR code. This was highly beneficial for small merchants and Kirana stores especially since the transfer of payments was free.

BharatPe was founded in April 2018 by Shashvat Nakrani and Bhavik Koladiya. Ashneer Grover joined the team in June 2018. In the initial stages the  company’s ownership was divided equally between Nakrani and Koladiya. They both owned 50% each. The shareholding structure changed with the joining of Ashneer Grover. The majority of the stake was still held by Koladiya (42.5%) as he was the face of the company. Nakrani held  25.5% of the stake and Grover was given a 32% stake.

Soon after Ashneer Grover joined the company Koladiya’s name disappeared from the list of founders. This was the beginning of controversies for BharatPe. Koladiya had been convicted in  a US court in 2015 for credit card fraud and hence his name  as the founder was problematic for the company. They were unable to secure funding as investors were not comfortable with Koladiya’s name as a founder. Ashneer Grover became the face of the company ever since. Grover served as the MD and co-founder of the company till he resigned on 28 February 2022.

In February 2019 BharatPe raised  $14,500,000  from BEENEXT, Insight Partners, Sequoia Capital India and Venture Catalysts in a series A round.  Six months later in August 2019 they raised $50,000,000 from BEENEXT, Insight Partners, Ribbit Capital, Sequoia Capital and Steadview Capital. Then another $75,000,000 from Amplo, Coatue Management, Insight Partners, Ribbit Capital and Steadview Capital  in a series C round in February 2020. The  company continued to secure funding through the years and soon its valuation reached $2.85 billion making it a Unicorn startup in 2021. With an investment of  $370 million from Tiger Global Management LLC along with other existing investors like Dragoneer Investment Group, Coatue Management, and Ribbit Capital on August 4, 2021 BharatPe became one of the top 5 most valuable fintech startups in India.

This Unicorn startup has been plagued with controversies through its entire journey and things have only become worse with time and with the boardroom battles now reaching the court.

Grover has been on the panel of a TV show named Shark Tank India which is an Indian adaptation of the globally renowned business reality show. He was one of the seven sharks on the show in its first season. Of the seven sharks, he was  the most disparaging to contestants. He became both popular and infamous for his brash behaviour on the show. He has now been replaced by Amit Jain, CEO and co-founder of CarDehko. This was however brushed off by Grover saying the show could no longer afford him.

On 4 Jan 2022 audio tapes of Ashneer Grover using explicit language were leaked on Twitter. Kotak Mahindra claimed that Grover had used abusive language with their employee because his loan for investing in the Nykaa IPO did not go through. Grover denied this allegation and said tapes were fake the very next day. He deleted the tweet soon after claiming that the audio clip was no longer on social media. On 9 Jan Kotak Mahindra announced that they would take legal action against Ashneer for issuing death threats to their employee. Grover and his wife had filed a suit against Kotak Mahindra in Oct 2021 for the losses incurred because of missing out on the Nykaa IPO.

In 2021 PhonePe issued a legal notice to BharatPe for infringing on their trademark by using the word Pe. BhartPe made no comment on this issue. The court ruled that the usage of the word Pe in both the company’s names was nothing but a different spelling used to denote the word pay and added that no rights can be claimed over a mark which describes a word or even a word which is used to describe a part by misspelling it. The court conveyed that PhonePe could not claim rights over the word Pe.

On 10 Jan 2022 the board of directors of BharatPe asked Grover to go on a mandatory leave of absence. They claimed it had nothing to do with the Kotak telephone controversy but it was due to financial irregularities. The board appointed Alvarez & Marsal, a risk advisory firm to conduct an independent audit of the startup’s internal processes and systems. This brought out frauds in vendor payments and other financial irregularities. Grover’s wife  Madhuri Jain who had headed the Controls at BharatPe, was terminated from her services due to financial irregularities. This termination meant that she had to part with her stake in the company due to “misappropriation of finances”. Madhuri jain in turn called the BharatPe Board of Directors,  “male chauvinists” along with accusing them of “objectifying women”. Ashneer then seeked legal counsel from Karanjawala & Co., a law firm from Delhi NCR. He wanted to secure his position in the company and protect his shareholding of 9.5% in the company.  He demanded Rs.4000 crore  from the board for buying out his share of the company.

“Either I’ll run the company or they buy me out; there is no third option,” said Ashneer.

Ashneer’s demand was rejected by the BharatPe Board. PWC was asked to conduct another audit and its findings were in the Board meeting’s agenda. Grover then resigned from the post of MD but continued to retain his shareholding in the company.

BharatPe had several resignations in quick succession. Nishit Sharma the Chief Revenue Officer of BharatPe and Chandrima Dhaar the Head of  Debt, resigned on 8 June. This was due to the appointment of Nalini Negi as the Chief Financial Officer at BharatPe. Another founding member Satyam Nathani also submitted his resignation on June 11th.  The market became flooded with job applications of the other employees of BharatPe as they started losing trust in the operational abilities of the company.

Karan Sakari an employee of BharatPe posted on Linkedin that Bharatpe was not paying salaries. Karan also mentioned that all of the old admin and staff of BharatPe had been terminated without any reason and had not even been paid off. This post garnered more interest when Ashneer asked the CEO Suhail Sameer and Hersimran Kaur to look into the matter. Suhail replied  saying that Ashneer had stolen all the money and that only a little amount was left to pay the employees. The spat only ended when Suhail apologised on the same thread and mentioned that all salaries were being paid and requested employees to refrain from building stories on social media.

The Directorate General of Goods and Services Tax Intelligence (DGGI) had been scrutinising the financial data of BharatPe for several months. BharatPe was fined by DCGI in October 2021, for an amount close to Rs. 12.5 crore. The reports stated that the company had generated invoices for non-existent vendors. The Suhail Sameer-led company had to deposit Rs 11.5 cr on the earlier occasion as a penalty and another Rs.1.5 cr of penalty this time.

BharatPe announced the plans for disbursing gold loans. Grover claimed that this idea was his and Suhail was taking credit for the same.

Grover was attacked in social media for owning a Porsche Cayman especially when he himself had criticised Suhail Sameer for buying a BMW Z4 convertible ‘within a year of joining BharatPe’.

A Bloomberg report said that Grover had spent Rs. 1 crore on his dining table to which Grover’s response was to tweet a photo of a dining table and commenting that it was not even worth 0.5 % of the alleged amount.

BharatPe filed a civil lawsuit against  Ashneer Grover  on 10 May 2022. It claimed a total of Rs. 88 crores in damages, Rs. 83 crore for misappropriation of funds and 5 crore for  reputational damage due to Grover’s public statements.

“Once the Defendants occupied these key positions and roles, they treated the Plaintiff as their personal fiefdom. By willfully perpetuating the lack of internal governance policies in the Plaintiff company, they conducted its affairs for their personal benefit,” BharatPe alleged in its plea.

After the PWC report revealed financial irregularities the company alleged that the Grover family had created fake bills and made payments  to fictitious vendors for providing services to the company. It also filed a criminal complaint against Grover and his family with the Economic Offences Wing (EOW) on 17 counts, including criminal breach of trust, forgery, document fabrication, and embezzlement.

A complaint was filed with the Singapore International Arbitration Centre (SIAC), to get his 1.4% of the company’s unvested shares back  and to stop Grover from using the title of cofounder. Gover claimed that this complaint was filed because Suhail and the board feared his autobiographical book “Doglapan”.

Delhi High Court issued a notice and summons to BharatPe’s former Managing Director and his family to respond to the charges and to restrain them from making defamatory statements against BharatPe. The next hearing is set for 9 Jan 2023.

BharatPe has been reeling from scandals and controversies for quite some time. One has to see how the case against Ashneer progresses. Will the company be able to break the shackles left by these controversies and win back its reputation as a reliable company? BharatPe plans to launch an Initial Public Offer within the next 2 years. Let’s hope for the best!

“Our plan is to build a lending book of about Rs 40,000 crore ($5 billion) in five years,” said the CEO of BharatPe, Suhail Sameer.

Recently Ashneer Tweeted about BarathPe CEO Suhail Sameer in a sarcastic manner. And the mudslinging continues!!!