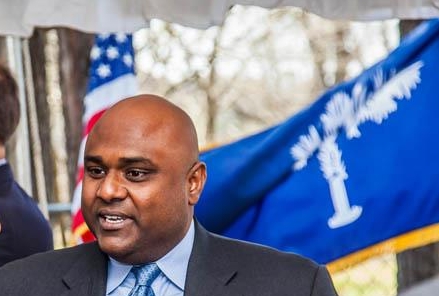 Navin Shankar Subramaniam Xavier a 44 year old Indian American is charged with wire fraud in US. He was a former CEO of Essex Holdings Inc. If the charges are proved right he might face 20 years in prison.
Fraud started in the year 2010 where Navin was CEO of Essex Holdings Inc. He raised more than $29M from more than 100 investors to invest in sugar transportation and shipping, as well as iron ore mining in Chile.
Navin Made false promises of fixed return on investments he also forged financial and business data to show a rosy picture claimed the prosecutor.

“Most of the money was used for purposes other than what was promised, including to support lavish spending by Xavier and his wife for expensive jewelry, luxury vehicles, wedding expenses, and cosmetic surgery,” the Justice Department said.

In another fraud he was said to obtain a 1.2M contract from South Carolina real estate agency by forging bank statement and inducing fake contractors.

Navin Xaview is based out of Indian state of Tamilnadu settled in US.
It is not very clear on who reported the fraud.
A file picture shows Navin Xavier having meeting with Higher officials of Marion city.

Gov. Haley talks with Dr. Navin Xavier at Marion announcing Essex Holdings making a $54 million investment in the county to bring a rice packaging and distribution center to Marion.

Navin with other Marion county officials.