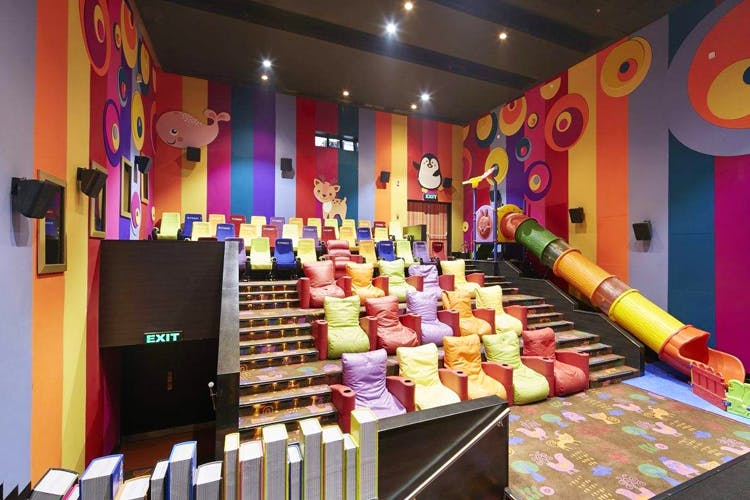 India is movie loving country. Movie theatres are the only source of entertainment available to the common public. The experience of watching a movie in the theatre is almost considered sacred as it is a place you get transported to a different world for a couple of hours. This experience has been enhanced in the past decade with improved sound, picture quality and of course the multiplexes. Most cities in India have a PVR cinema which is the hot spot for all new releases.

India along with being extremely tolerant is also a child-friendly nation. We are programmed to smile at kids even if we don’t know them. Any nuisance children create in a public space is endured with a smile. PVR cinemas have taken this concept to the next level. Should we as a tolerant nation accept these new concepts?

PVR launched PVR Playhouse in 2016 in Noida.  Playhouse is a concept of a specially designed theatre for kids from the age of 3 to 12 years. Most normal people like me are unaware of such a concept as it is only available in a few cities.

Recently I wanted to see the movie Avatar the way of water, however, all the shows were in 3D. I wanted a 2D show as me and my 75 year old mother were not comfortable with a 3D show. When we tried to book the tickets on an aggregator platform BookMyShow, we realised that there were only 2 theatres offering a 2D show, Prasads and PVR in Next Galleria. Since we were living in Ameerpet, Hyderabad we chose the PVR in Next Galleria. This PVR had only 2 shows in 2D, at 5.30 pm and 9.30 pm. Both were labelled as Playhouse. Not aware of the term I assumed it was just a name given to the auditorium. I selected the 5.30 pm show and proceeded to book the tickets. Before the seat selection, a pop up appeared with terms and conditions. As it was a simple act of booking a movie ticket I did not give it a second thought and immediately clicked on accept. Confirmed the seats and made the payment.

The next day when we entered the Playhouse auditorium we noticed it was designed for children with bright colour schemes, colourful seats and cartoons everywhere. To our surprise, there was even a slide inside the hall. The seating capacity was below 60 so it looked like a private screening area for kids’ birthday parties. Unaware of what was in store for us, my mother and I found our seats and settled in for the movie. We noticed a few kids running around and playing on the slide before the movie started. To our amazement, the children continued to run and play even after the movie started. Almost 12 children were playing, screaming and running throughout the movie. It was difficult to hear the dialogues or even concentrate on the screen as children were continuously running across our seats. We thought the parents would quieten their children soon, after all it was a movie theatre and the primary objective is to watch a movie.

Half an hour into the movie the children only became more boisterous and noisy. I asked one of the parents to kindly quieten their children, to which he replied that, this is a playhouse and children are allowed to make a noise and play. I was horrified by this answer as it was after all a public space for watching a movie, not a park! It was impossible to watch the movie with noise so I decided to talk to the manager about this. The manager apologised for the inconvenience but said that he could not do anything as playing was allowed in the Playhouse auditorium.  He showed me the terms and conditions and said it was mentioned in them that there might be the noise of kids playing. He offered to let us watch another show but since all other shows were 3D we were not interested. When we declined the manager, to his credit said he would provide a refund for the tickets. I appreciate the handling of the complaint in a calm and efficient manner by the manager how ever, I question why such a concept exists.

My Issues With The Playhouse Concept

Quote from the Terms & Conditions which only comes as a pop up before seat selection and is the same for all screens.

“Inside the playhouse auditorium, due to the nature of the cinema format, we will maintain low intensity light throughout the screening of the movie. You may also experience the noise of kids playing inside the auditorium. Have a safe and enjoyable playhouse movie experience.”

I understand that PVR is trying to monetise and capture all market segments, but this concept of a playhouse is absurd. It is okay for private screenings to have a child-friendly theatre but combining it with regular screens is not acceptable. After all, a movie theatre is meant for a movie-watching experience for kids and adults alike, not a play area or park.  Kindly keep them separate!

As for the parents who knowingly opt for this my only question is WHY??? If you want to watch a movie find a babysitter, if you want the kids to watch the movie then make them watch it instead of playing. Why are you paying to come to the theatre with exorbitantly priced snacks only to have your kids playing in the dark while you half watch a movie in which you cannot even hear the dialogues? Isn’t it easier, cheaper and safer to go to a park or play zone for kids instead. Choosing the playhouse serves no purpose whether for you or your kids and most importantly shows your utter disrespect for norms of a public space.

This was the worst movie experience of my life and I urge PVR to explicitly mention the kind of environment in a playhouse. Simply mentioning it in the terms and conditions along with 15 other terms is not sufficient. Nothing can prepare you for a dozen rambunctious kids shrieking all through the movie. PVR should not allow any person above 18 years to buy tickets for a playhouse screen if not accompanied by a child below 12 years. This is both for the safety of the children as well as the sanity of the moviegoer.

This was my experience and perspective. I would like to know what you think. Do you agree with what I say or have a different opinion? Comment below.