It all Started in May 2016 for Penny Kim when she received an interview call from a Silicon Valley startup WrkRiot. She was excited to move to Silicon Valley and experience the startup adrenaline. But 3 months post that feeling, she had to go through a horrible journey. Kim was offered the position of Marketing Director with yearly compensation of $135,000 /- plus $10,000 joining bonus and equity. In July she packed her bags, fared good bye to her apartment in Dallas and hit the road to California to join her Startup life. Everything was fine during her initial days at the startup until the pay checks came in late. She got payed late but the developers who were on H1B status were not paid. She later found out that a fellow employee lend $50,000 while another $15,000 to the CEO, Isaac Choi.

Kim was shocked to hear this since Isaac promised her a marketing budget of $4Million. She started connecting the dots. The job offer was too good and she blindly left everything in Dallas and moved here. Isaac told her than he had $1Million funds in the bank but they were banking on two investors for their growth

In august the employees were mailed a wire transfer copy of Wells Fargo saying that the salaries were dispatched. The employees were asked to take it up with their bank for the salary not reflecting in their account. Anyone with minimal photophone knowledge could figure out that the receipt was fake. Looking at all this Kim filed wage claim with the Labor Board but was fired immediately for doing it. The CEO told her that she got fired because she is trying to “kill the company by turning the team against him by encouraging them to file wage claims.” She was also taken of the team picture in the website. It was illegal to fire an employee after a wage claim. She was given her salary but not her joining bonus. WrkRiot wrote a status update on their Facebook post firing of Kim, who knew this would be their last post on social media. 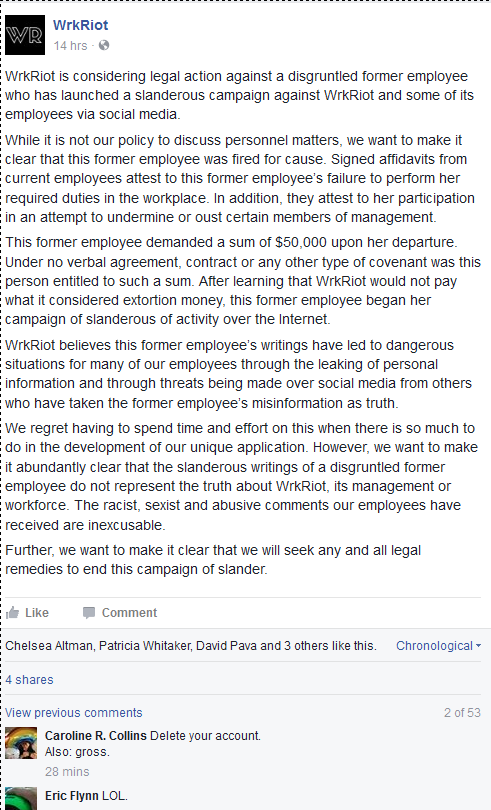 This story came out 2 days back when Kim wrote her 3 month horrifying experience in Medium.com without revealing company or colleague names. Thanks to the internet we could figure out Kim’s company and other details. WrkRiot has vanished from the face of digital platform. No profile on Facebook and Twitter. The website is also down. Startups have amazing ideas and to get the best talent (in this case Kim), they show some dreams. But show dreams that can become reality and never ever play with employees’ feelings. Isaac chose the wrong marketer to mess with and today he is know in the digital world as a con artist. This is just one story, there might be many such incidents out there, please be cautious while joining a startup and always have a contingency plan. Read more on Startup Scams