GrabOn, the company launched by Landmark IT Solutions, focuses on online coupons and deals supported by an easy-to-use interface catering to the needs of all Indian shoppers. They have announced their first e-commerce office to be opened at Hyderabad.

Setting up was not easy for GrabOn

Grab On did face issues in setting up. One of them was to handle the traffic flow post implementation and initially they had to boost their servers. It was still a roller-coaster ride since their main motto was to attract customers.

From Observation to Implementation

Ashok observed that coupons and deals industries have immense potential and brands that can be created. He had been at US for 9+ years and read the coupon market. Ashok then came up with the idea GrabOn under its parent company “Landmark IT Solutions”, which he believed to grow into a big brand as Indian e-commerce industry is booming. 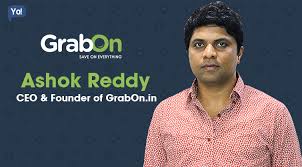 A good support for the employees

GrabOn grew from 5 to 46 in just a span of 15 months and is one among very few companies in India that encourages Entrepreneurship within the organization. One such example is Inspire Labs, where the employees can post their ideas and if they turn out to be the future, Landmark funds them with 20 lakhs. GrabOn was started by 5 freshers who were working with Landmark in September 2013.

Around 2500 merchants already in the list and more joining hands with GrabOn everyday has been a fuel to their successful growth so far. The first India’s couponing space GrabOn’s “Buzz” feature was launched in 2015 has seen more than 80 million coupons redeemed and 200 millions in savings for customers, which is for a real-time coupon notifications. One proud moment to be shared is that, GrabOn has been the fastest startup in India to grow uptp 6.5 million visitors and has took less than a year to become the #1 coupon company in India.

Just a Matter of 5Mb

GrabOn’s app was launched on 1st December, 2016 and is a prime example of good quantity of high quality features. The 5mb spaced app comes armed with:

Be different and Think different

GrabOn is a competitive curve and is trying its level best to give their users which no other coupon websites can give. One such outcome is Buzz Me, which sends the real time notifications to users on their desktops/mobile screens whenever a new coupon is added. Revenue is made from merchants whenever transactions are been made.

GrabOn was  initially funded with Rs.250000 by internal HNI group and is on a plan to raise funds that helps them to penetrate into offline market as well. In the near future, GrabOn has planned to hit 50 million users and be on top 50 most visited websites in India. GrabOn has 16 out of 25% market shares of coupon industry and are on plans to increase the market share through technology innovation using AI and Machine learning. Read more about Indian Startups.