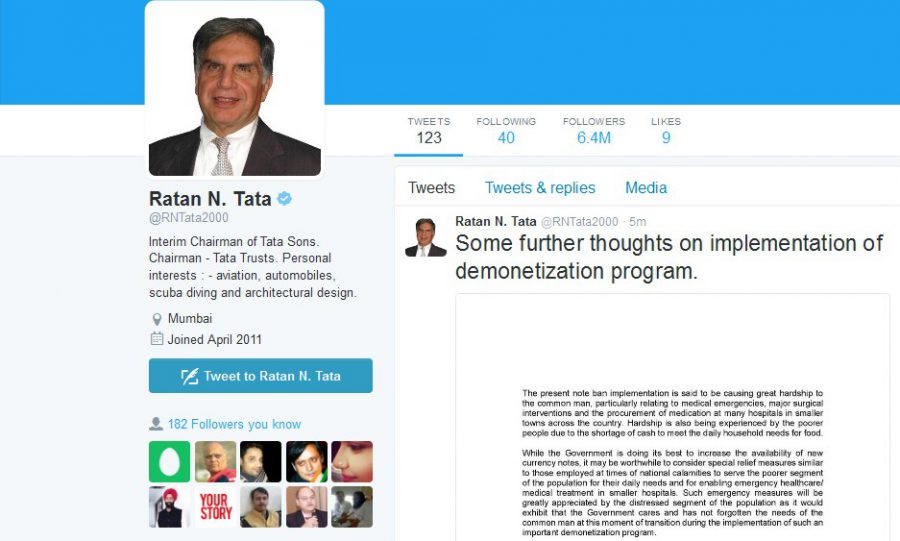 Ratan Tata who was all over the news for firing Cyrus Mistry comes into limelight after his recent status update on Twitter. The update says that Ratan Tata is requesting the government to help the poor, especially during this phase of Demonetization.

Well he did not copy past his request in the twitter status box, instead pasted a screen short of his message written in a word file. The word file is date 24th November 2016, i.e. today. Below is the image he uploaded in his official Twitter account. His message tells that this demonetization move has caused great hardship to the poor. The poor, especially in the rural areas depend on cash for medical, emergency, and household needs. He requests the government to launch a relief team that can help the needy. Well the government employs special relief team that helps citizens during national calamities, the same should be done during this time.

On 22nd November he posted “Demonetisation of old currency notes by the Modi govt is a bold act that will wipe out black money and corruption. It deserves our support”. Its great of Mr Ratan Tata to post his recent thoughts through his Twitter account. This shows that he supports demonetization initiative by PM Modi, provided the government also takes care of the poor and needy during this transition time. Read more Business News.