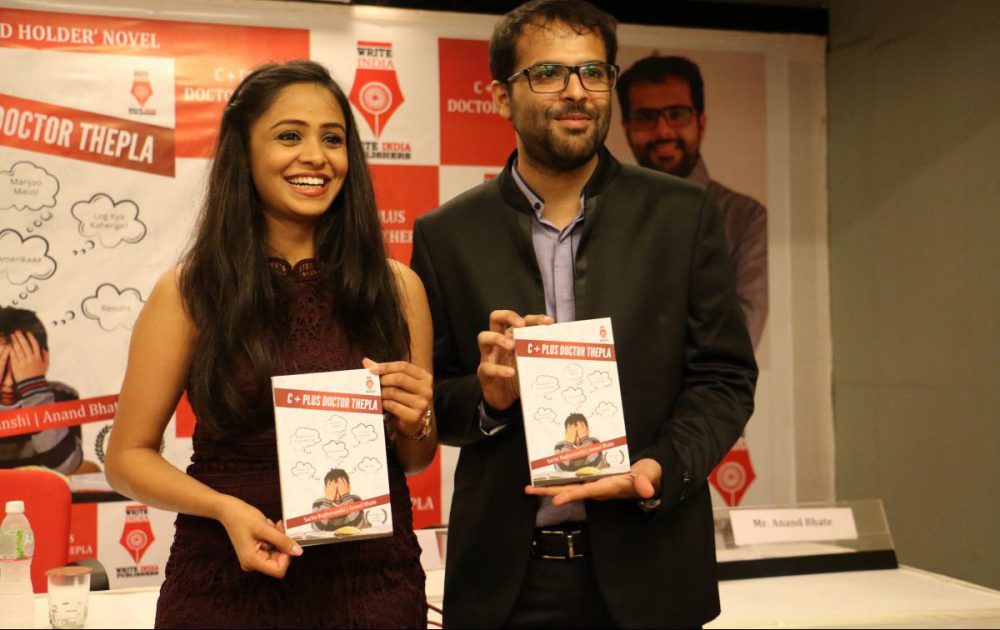 This author-duo penned down this Fiction Novel to Promote Start-up Culture of India. Ms. Sarita Raghuvanshi and Mr. Anand Bhate talk to IndianCEO about their novel, why they wrote it, the World Record it created, the high profile launch and much more.

Right now in our country, we are seeing that students after their college education are spearheading the start-up revolution. To fuel and support the same, this author-duo has penned down a fiction novel in English titled “C + Plus Doctor Thepla”. It is authored jointly by Bengaluru based Ms. Sarita Raghuvanshi (alumni of Dayananda Sagar College of Engineering, Bengaluru) and Ahmedabad based Mr. Anand Bhate (alumni of Symbiosis Institute of Business Management, Bengaluru).

IndianCEO: Why a novel on the start-up culture of India?

Authors: Ms. Raghuvanshi resides in Bengaluru and Mr. Bhate has stayed at Bengaluru for 7+ years. So, both of us have witnessed the start-up culture grow and boom there. A lot of our friends and acquaintances are directly or indirectly into start-ups. Hence, we have always heard and known of the issues and problems that an early stage start-up business witnesses. We wanted to get this out to the country, and give effective solutions to it. We spoke with over a hundred start-ups of our country, to know more about their experiences and journey. Their problems, the way to tackle them, and clearing a lot of misconceptions have all been effectively portrayed in the novel in a light read format. The readers can expect a lot of fun, romance and humor in the novel, with right dozes of encouragement and motivation. We believe that the start-up culture environment of India is extremely promising, and hence this is an attempt to boost and promote it.

IndianCEO: Tell us about the plot of the novel.

Authors: Our country is experiencing a rather confused state of mindset nowadays, where on one hand we are witnessing the emergence of a start-up culture spearheaded by the vision of our current Prime Minister, Mr. Narendra Modi himself and still there are people who are held back from chasing their dreams and creative mindsets because of Manjoo Mausi’s “Log Kya Kahenge?” attitude. This novel aptly tells you how students in India are treated like ‘puppets’. The novel intends to stop this constant pressurizing on students. It deals with our protagonist (a start-up enthusiast) trying to overcome “Log Kya Kahenge?” and still not upsetting his family. This novel, which promises elements of humor, romance, emotions, tragedy and a bit of motivation, has depicted the struggles of an average Indian student in pursuing a start-up right after college. The story of “C + Plus Doctor Thepla” revolves around Abhishek Patel, an Engineering student at Bengaluru, who wants to become a chef and start-up his ‘Thepla’ restaurant chain globally. Being a chef isn’t a career that his father (a doctor) could accept, and his neighbor ‘Manjoo Mausi’ ensures that he becomes atleast an Engineer, if not a Doctor, otherwise, “Log Kya Kahenge!” Abhishek has to go through a lot of family and societal objections while pursuing his dream of a start-up. The novel takes you through the journey of Abhishek’s school and college life that every Indian student can relate to.

IndianCEO: How is C Plus Plus Doctor Thepla doing with the readers?

Authors: We’ll answer this in two parts: (1) During the pre-launch campaign, we came up with a unique novel promotional video made which had a puppet in it. This video was uploaded on YouTube in June 2016 and it received tremendous response and critical appreciation. This promotional video, and the novel, went on to create a World Record for being the first of its kind. The hashtag #DontBeAPuppet has been used for this campaign which indeed strengthens the core motive of the novel, i.e. students in India should NOT be treated as puppets.

(2) The  novel was put up for pre-order by our publisher “Write India Publishers” on PustakMandi.com and Amazon.in in early September 2016 and 1200+ copies had been ordered. The novel has appeared several times amongst the top-10 in the ‘Hot New Releases’ category on Amazon.in. The publisher has done the first print-run of 5000 copies and the same will be distributed via 300+ bookstores of India and various online portals. The novel was launched on September 20th, 2016 at Ahmedabad by its Mayor Mr. Gautam Shah in a high profile event. The team of IndianCEO conveys its best wishes to the two! Read Latest Startup News.