The Erring Bankruptcy For Reliance Mobile

I was in my college when I have witnessed a mobile revolution in India. Reliance Mobile launched CDMA mobiles and any one can get a mobile for just RS 1. Millions got that small and cute mobile handset and vision of connecting millions with portable telecommunication was possible for the first time. Apart from keeping the cost of handset to ZERO, Reliance reduced the call tariffs in a big way. It was a jaw dropping offer and everyone got a new mobile including my Dad. At that age I really liked the cool technology in my hand.

This is followed by funny Verendra sehwag’s advertisement where he gets a call from his Mother on a reliance mobile “Karlo Duniya Muttymey”. Advertisement was a huge hit and the vision of owning a mobile phone by everyone was close to reality. 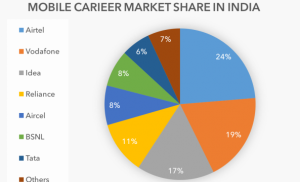 Years followed the domination of CDMA, though there was cut throat competition Reliance managed to lead the race. However reliance was not able to keep up in the GSM race and eventually lost to Airtel, Vodaphone, Idea. Now it occupies the 4th place in carriers based on subscribers.
These are figures based on 2015 data.

Here is why Reliance is driving towards bankruptcy

Reliance over the years failed to deliver right service to the customers and post TRAI’s decision to allow number portability many subscribers eventually moved out to other networks.

Taking my example. I have taken reliance mobile connection for my office use early this year. I was very skeptical to take reliance as service quality is poor and I had bad experience with it a few years back. I got tempted by the fancy number that it offered and finally took the connection.

My office was in tech savvy Hitech City and everything was working there except my reliance mobile. I can count my fingers on how many times my mobile network has shown full strength. It was a customer care number and we published it every where including press, media and advertisements. If you try 10 times our mobile was reachable only 1 time. Signals were on and off and you have to find a sweet spot to make it work. Even the limited calls received by us never used to have audio clarity and our team used to call back from other network. When I tried to do number portability as per rule I have to wait for 3 month before I switch over to another network. I called customer care many times to complain about this but received no help. Many times my calls get disconnected by customer care executives. I had to use a different network to call customer care as the reliance mobile can’t reach their customer care number.

I traveled the month with that pain and I was told that network else where is good except that area. I moved to our new office in Banjara Hills this month and was expecting the problem to be resolved because of new location. However things became bad to worse, we were not even getting network. Then I realized it is  not about location it is about your mobile carrier. My other phones were working good except Reliance. As I completed my 3 months journey with Reliance, I started porting my number to Airtel. Reliance customer care care executive called and tried to convince me to stay on Reliance network for no reason after many discussions finally she sent me porting number. I applied for porting to Airtel but unfortunately request was declined by Reliance stating the I have Rs 22 over due in the account. Now I paid 200 in advance and applied for porting and I hope that it will be done shortly.

Any company whether it is telecom or others can only build a solid business on customer loyalty. Gone are the days where people have less or no choice. I think if the current situation continues with reliance, It will not be far away from being bankrupt. It is time for the senior management to show some urgency before things get out of their hand.

Reliance(Mukesh Ambani Group) is now aggressively launching 4G with reliance Jio and I am sure to stay away from Jio with the experience I have with Reliance tag. Many others like me would also hesitate before opting for new services with reliance tag. Act before you are thrown out by customers.